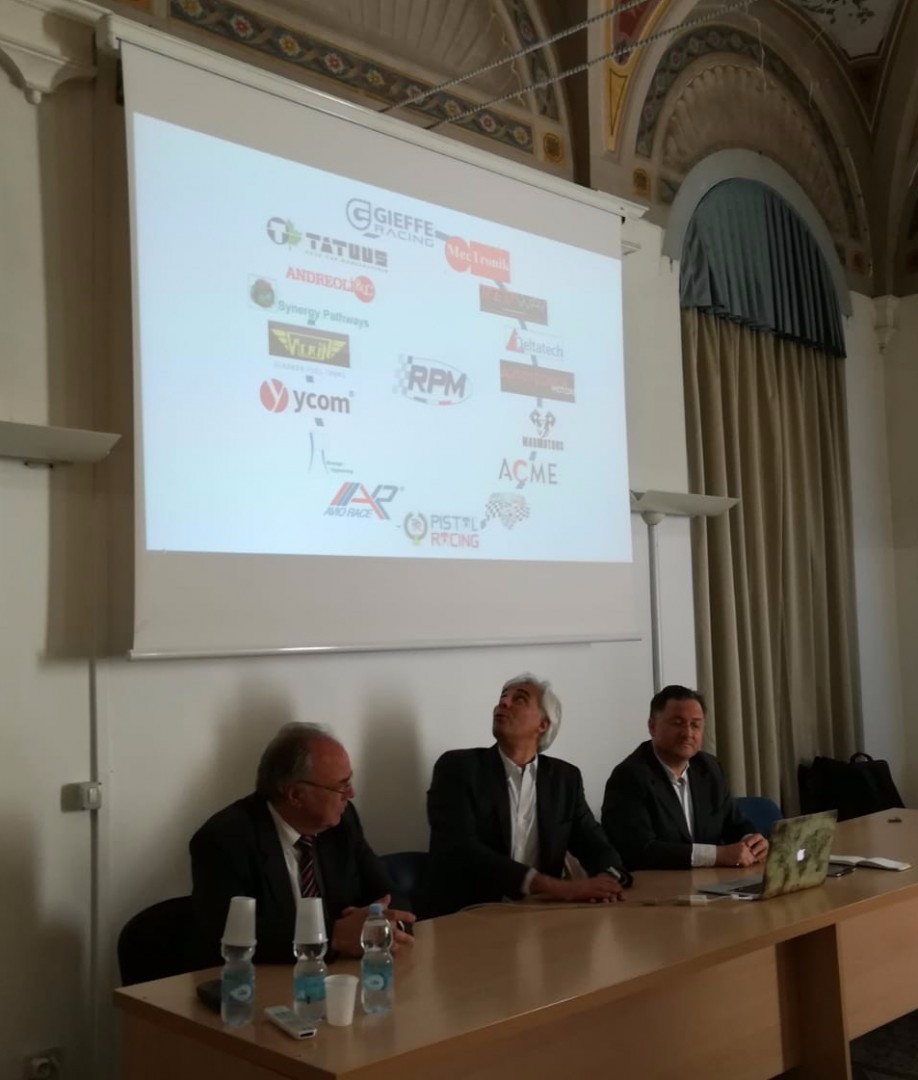 On 12 April 2019, in the timeless historical premises of La Sapienza University’s Engineering faculty, RPM launched its first public conference. The network was presented by tracing back to its roots, its present and future aims and these introductory contents were further articulated by specific specialists in their field. Francesco Sedea (RPM President), Riccardo Paterni (RPM Vice President of Business Development) and Giorgio Casolari (RPM Vice President of Network Development) moderated the debate that followed.

Engineer Luca Marmorini, from Marmotors Srl (a founding RPM member) briefly illustrated the pathway of technological developments that have linked and are linking Motorsport to the future of mobility. In particular he pointed out the traditional strength of Motorsport companies in harnessing prototyping by embracing with focus and flexibility the toughest challenges of prototype manufacturing technology’s. He also pointed out that Motorsport has traditionally worked on an efficiency perspective in order to generate performance and that this is a key value added to many projects not only in Motorsport (for example key people operating in the SpaceX Elon Musk program have Motorsport background).

Professor Leone Martellucci, from the Engineering Faculty of La Sapienza University (a close cooperation is likely to develop in technology terms between this university and RPM) added that going even beyond efficiency, the future of mobility is linked to alternative sources of energy and in this too the ‘Motorsport mindset’ has shown to be a winning factor. He spoke about his experiences as a student with the legendary Giotto Bizzarrini and illustrated the accelerating progress of power energy management through the evolution of the Formula Student SAE projects.

Dr. Tim Angus, Honorary Research Fellow from Coventry University, pointed out the research that has been done throughout the years on the UK relevant to the growth and dynamics of the Motorsport Industry in that country . This included the UK motorsport industry’s direct knowledge transfer links to other sectors such as automotive, aerospace and defence amongst others. In terms of industrial identity and synergic developments the Italian Motorsport Industry has similarly relevant paths to follow and one of RPM’s network aims is to focus directly on guiding and implementing this process of industry diversification.

Engineer Rodi Basso, Motorsport Director - McLaren Applied Technologies, fascinated the audience with a presentation with the title ‘The humanistic face of Motorsport’ pointing out how the context of Motorsport has evolved into a vision embracing technology and marketing in a powerful flow of effective innovation; a vision that in itself has the potential to fuel innovation driven by sustainability, entertainment and a sense of convergence regarding serving the actual needs of the market,. This kind of flexible, focused approach, rooted in Motorsport, is effectively utilised in fields as diverse as automotive, healthcare and natural resources preservation and management.

Finally Professor Riccardo Giannetti, from the Economics and Management Faculty of Pisa University (who are already cooperating with advising on RPM’s organisational set-up), pointed out the organisational aspects that can be utilised to create synergies among business models already present within the RPM network. He also outlined how to shape new business models by leveraging the varied competencies present within the RPM network. Ways to evaluate RPM performances have also been suggested by Professor Giannetti.

The conference ended with a short session that summarised the debates from the day and also from the network general counsel held the previous day . The final session also summed up what’s next for RPM, by a slide in which Rodi Basso pointed out what’s in the immediate future for RPM:

RPM’s organisation is committed to stimulate and drive the teamwork needed to implement and achieve these network goals and the ones to arise in the future.