Motorsport Global Contribution to Economy and Community Development: a New Relevant Report from the FIA
Posted by Synergy Pathways on 18/07/2021 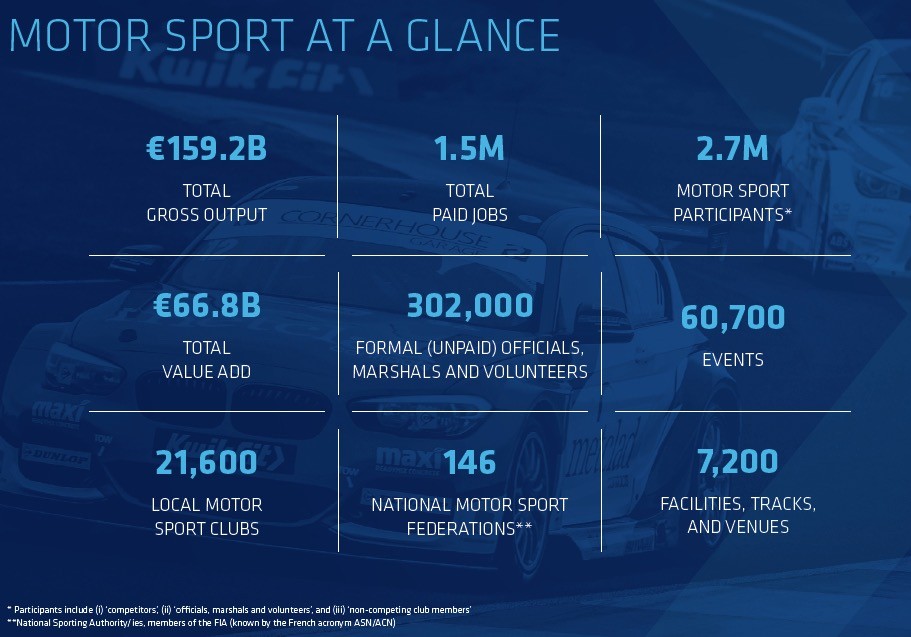 Recently the FIA has released a research study focusing on the contribution of motorsport to economy and community development.

It represents the first substantive overview of the topic since 'Motorsport Going Global' was written in 2007 by Dr Tim Angus (Synergy Pathways Associate and RPM Board Advisor / UK Representative) and co-authors Professor Nick Henry and Professor Mark Jenkins.

The report was produced by Ernst and Young (EY) (Australia), it took two years to produce and cost 605.000 euros: EY surveyed over 20.000 motorsport participants from all over the world  and conducted over 50 interviews.

The figures pointed out reveal the global relevance of the Motorsport Industry and it is to note that the research does not even focus yet on motorsport active contribution to many other fields as aviation, aerospace, nautical, biomedical, virtual reality as it was recently outlined during the conference Motorsport Next: Industry Innovation and Technology Transfer Global Forum.

The full report is available at this link.

We are committed to contribute generating synergies among private and public organisations and institutions in order to stimulate the necessary cooperation to acknowledge and support the growth and strengthening of the Motorsport Industry in Italy. Motorsport Next, and the players it has involved has exemplified a first cornerstone on which to build all of this. Stay tuned for developments.

To offer you a better browsing experience, this site uses its own cookies and those of third parties, selected partners. Third-party cookies may also be profiling. Read our information on the use of cookies to learn more or go to "Customize" to manage your settings. By clicking "Accept" you consent to the storage of cookies on your device. By clicking on "Reject" or on "X" in the right corner you accept the storage of only the necessary cookies.